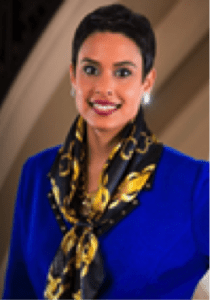 Nupur was the managing director of marketing and public relations at Brown Capital Management from 2004-2019. Prior to this, Nupur served as a marketing executive at the global law firm DLA Piper. Before joining DLA Piper, she spent three years as a political appointee at the U.S. Agency for International Development, working in the Bureau of Legislative and Public Affairs. Nupur is the founding owner and CEO of NUPUR LLC, which is the inventor of a consumer/commercial product with a trademark and patent pending and scheduled to launch in Fall/Winter 2021.

Dedicated philanthropists, Nupur and her husband Guy in 2019 became the 13th members of the United Way of Central Maryland’s Million Dollar Roundtable. In 2020, they were honored by The Children’s Guild Alliance with its “Sadie Award” for their lifelong work on behalf of children in the greater Baltimore and Washington, DC regions. In September 2020, Nupur and Guy were named recipients of the prestigious United Way of Central Maryland “Philanthropists of the Year” award at the organization’s annual Tocqueville Society event. Additionally, Nupur received the alumni “2020 Community Service” award from McDaniel College, her alma mater, in October.

We use cookies on our website to give you the most relevant experience by remembering your preferences and repeat visits. By clicking “Accept All”, you consent to the use of ALL the cookies. However, you may visit "Cookie Settings" to provide a controlled consent.
Cookie SettingsAccept All
Manage consent

This website uses cookies to improve your experience while you navigate through the website. Out of these, the cookies that are categorized as necessary are stored on your browser as they are essential for the working of basic functionalities of the website. We also use third-party cookies that help us analyze and understand how you use this website. These cookies will be stored in your browser only with your consent. You also have the option to opt-out of these cookies. But opting out of some of these cookies may affect your browsing experience.
Necessary Always Enabled

Any cookies that may not be particularly necessary for the website to function and is used specifically to collect user personal data via analytics, ads, other embedded contents are termed as non-necessary cookies. It is mandatory to procure user consent prior to running these cookies on your website.