The year was 1992 and a group of four women came together to discuss and ultimately launch an organization to highlight women in leadership. A secondary goal would later become a central focus as the organization evolved and that was to gain the attention of the broader business community in an effort to clear a path for more women to move into the ranks of senior management and boardrooms.

The origins of the name Network 2000 was based on the expectation that with a bit of focused advocacy and a rational business case for gender inclusion, the representation of women on boards would grow to respectable levels by the year 2000. Great concept, however, gender equality like the fight for equity for other marginalized groups would prove to be a long, heavy lift.

Four trailblazing women conceptualized the organization. The original founders included       Carolyn Burridge, Jackie McLean, Tuckey Ramsey, all deceased, and Lois Shofer the last survivor    of the original four founding members. Their aim was to recruit the most senior women across various industry sectors and professions while limiting membership to no more than 50 in favor of quality over quantity. Other founding members were Floraine Applefeld, Sylvia Badger, Rita Colwell, Nancy Grasmick, Marilyn Maultsby, Clarice Mechanic, and Mary Ann Saar. Carolyn Burridge and Tuckey Ramsey served as the founding co-presidents of the organization. Shortly after the group started other women were invited to join Network 2000 and several became very active in the organization. Betsy Hayes served as treasurer, Marsha Jews served a six-month term as president and Betsy Zaborowski succeeded Marsha Jews and ended up serving a two-year term as president.

Tucky Ramsey’s husband, Federal Judge Norman Ramsey, advised that having an organization whose membership is limited to women only could exclude government and elected officials from participating. So, after recruiting the group of founding members the presiding officers set out to recruit men. Chris Eddings and Robert Schaefer were extended an invitation to join and enthusiastically accepted. Having Chris Eddings, Publisher of the Daily Record, join turned out to be mutually beneficial as Network 2000 is credited with co-creating Maryland’s Top 100 Women award which began in 1995 and to date in addition to becoming a highly coveted recognition event, the Daily Record has honored over 1,500 women for their professional accomplishments and commitment to mentoring and community service.

During the early years of Network 2000 members would hold breakfast meetings starting at 7 am and ending promptly at 8:30 am. Locations with reasonable prices and free parking were high on the list. One member, Mimi Roeder Vaughan was known for finding interesting locations around town. Mimi also organized bus trips to New York City for members to get to know each other in a social setting. Mimi’s contribution to the organization went beyond planning fun social gatherings, she started Network 2000’s Mentoring Program which since the late 1990s annually organizes a year-long professional development experience for mid-career professional women. Soon after starting the mentoring program, the Business 2000 Award was started to recognize companies that had impressive levels of women in leadership, and or female-friendly business practices and policies. 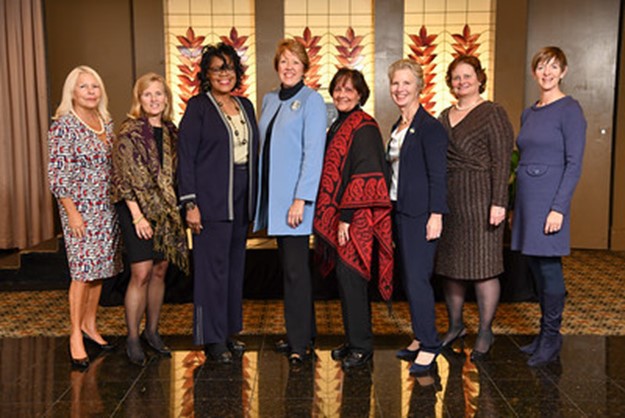 In 2004 Network 2000 created an endowed scholarship through the Central Scholarship program with a $75,000 contribution to establish the Network 2000 Emerging Women Leaders Scholarship Fund which annually awards a scholarship for a deserving woman to use toward graduate level studies. Nancy Sloane was president at this time.

The women of Network 2000 contributed a lot towards building the organization’s foundation and solidify its mission, along with establishing the event that the organization is best known for, the Annual Women of Excellence (WOE) luncheon which gathers high achieving women and emerging women leaders throughout Maryland for a high-profile luncheon event with a nationally renowned speaker.

The first Women of Excellence event was held on a snowy morning in February of 1993 at the Camden Club at Oriole Park in downtown Baltimore. Patricia Aburdene, one of the world’s leading social forecasters, and co-author of the New York Times number one bestseller Megatrends 2000 and Megatrends for Women was the featured speaker. With an all-expense paid invitation, and commitment to purchase 200 copies of her book Ms. Aburdene made her way to Baltimore. As a reward for braving the harsh weather and enduring both a breakfast event for about 300 women and a private, members-only session immediately following at the Center Club, Ms. Aburdene was made an honorary Citizen of Maryland with a proclamation personally signed by Governor Schaefer. A Congressional proclamation from Congressman Ben Cardin acknowledging Network 2000’s breakfast as an outstanding event and organization was also read during the event.

Patricia Aburdene became the first to grace the distinguished long list of Women of Excellence (WOE) keynote speakers to follow. Other notables over the 26-year history of WOE include the Honorable Madeline Albright, Coretta Scott King, Arianna Huffington, Donna Brazile, and prime minister of the United Kingdom Lady Margaret Thatcher, to name just a few.

Network 2000 is a unique organization with a mission that seemed within reach for a prosperous state like Maryland with its strong economy, diverse base of industry sectors such as health care, biotech, cybersecurity, and hospitality. With its status as one of the leading states in the nation for the number of women per capita with four-year and advanced college degrees one would think women would have little difficulty being recruited and groomed for the C-suite and boards, but the numbers would indicate otherwise.

As a means of tracking and recording the rate at which women are represented on boards of the public companies headquartered in Maryland, Network 2000 published its first issue of a Census Report of Women Board Directors in Maryland in September of 2007. The report was sent to the CEOs of the companies reported on as well as other business leaders, board governance officers, stakeholders and influencers who play a role in shaping policies and populating the pipelines that can help lead women to board seats and executive suites.

In 2016 under the presidency of Ann Quinn, the organization embarked on a thorough process to change its name from Network 2000 to Executive Alliance. The membership felt a new name was needed to better reflect the purpose and vision of the organization. Member Laura Pasternak led a series of market research, and focus group sessions which informed the thinking behind the selection of a new name and logo. Members Bonnie Heneson and Luwanda Jenkins co-chaired the branding committee which executed the roll-out of the new name, tag line, and logo:

EXECUTIVE ALLIANCE …A Catalyst for Women Leaders in Maryland.

The new name and tagline were intended to clarify the organization’s commitment to diversity in leadership and focus on moving women into leadership roles while establishing that the makeup of the organization consisted of executive leaders.

The new name and logo were unveiled with great fanfare at the 23rd Annual Women of Excellence luncheon. The featured guests were Donna Brazile and Mary Matalin, which was a first to have a dual speaker presenting in a conversational, moderated format. True to their frequently televised political commentary, they were engaging and enlightening as our event proceeded the fall 2016 presidential election which for the first time in US history there was a woman front runner. Hilary Clinton was the Democratic party’s nominee, all of which set the stage for an electrifying WOE event.

Armed with a new name and brand, the momentum continued to build leading up to the 25th Anniversary commemorated on October 30, 2018 at the 25th Annual Women of Excellence. President Pat Lambert presided over a special dinner event with the theme “Celebrating 25 Years: The Power of Change.” The featured speaker was Beth Comstock, former Sr. Vice President and Chief Marketing Officer of GE and author of the book “Imagine it Forward: Courage, Creativity and the Power of Change.”

While the women of Executive Alliance embraced and prepared for changes and new trends across the business landscape, the rate of positive change in the numbers of women represented on boards remained stagnate thus prompting a decision to pursue a public policy strategy to accelerate progress. Executive Alliance joined forces with Delegate Shelly Hettleman in support of HB 1116-Gender Diversity in the Boardroom which after a focused lobbying effort was passed and signed into law by Governor Larry Hogan on May 13, 2019. The new law went into effect in January 2020 and requires corporations and large institutional nonprofit organizations to report the number of women on their board on a required State of Maryland tax form. Maryland became the second state behind California to pass gender diversity legislation.

Passage of Maryland’s Gender Diversity law was celebrated at the 26th Annual Women of Excellence Luncheon on November 19, 2019. Delegate Shelly Hettleman, now Senator Hettleman, was given a special award. The featured speaker was Valerie Jarrett, former senior advisor to President Barack Obama and author of the book and memoir “Finding My Voice: My Journey to the West Wing and the Path Forward.” Executive Alliance President Lisa Hayes presented a new, first of its kind, Women’s Leadership Resource Guide published in partnership with the Daily Record.

Soon after the high of another successful WOE finally settled down, the Board set out to implement a new five-year strategic plan which was intended to transform the organization to manage the organization’s growth and to meet the demands and realities of the times. Two new committees were formed– Governance and Communications & Marketing. Just as the Board was gaining stride, a worldwide pandemic, COVID-19, hit and all activity came to a sudden stop as the state and city began imposing mandatory lockdowns and restrictions on public gatherings. The “new normal” consisted of work from home routines, social distancing, and endless zoom video meetings. Executive Alliance, like all other organizations, had to quickly adapt to new approaches for conducting business and facilitating member engagement. As expected, the leadership rose to meet the challenges of the new normal.

The slate of officers for the next year was unanimously elected by the membership during its Annual Member Meeting on June 4, 2020. The Annual Member Meeting is typically a nice dinner gathering to mark the culmination of another year of activity, however, due to COVID-19 the meeting was held virtually with an impressive attendance of 62 members. Lisa Hayes was elected to a second term as president and adjourned the meeting with a celebratory “virtual” toast!

This website uses cookies to improve your experience while you navigate through the website. Out of these, the cookies that are categorized as necessary are stored on your browser as they are essential for the working of basic functionalities of the website. We also use third-party cookies that help us analyze and understand how you use this website. These cookies will be stored in your browser only with your consent. You also have the option to opt-out of these cookies. But opting out of some of these cookies may affect your browsing experience.
Necessary Always Enabled
Necessary cookies are absolutely essential for the website to function properly. This category only includes cookies that ensures basic functionalities and security features of the website. These cookies do not store any personal information.
Non-necessary
Any cookies that may not be particularly necessary for the website to function and is used specifically to collect user personal data via analytics, ads, other embedded contents are termed as non-necessary cookies. It is mandatory to procure user consent prior to running these cookies on your website.
SAVE & ACCEPT