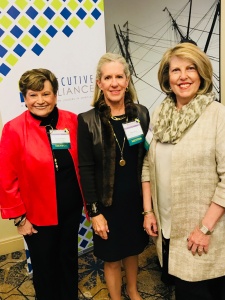 Executive Alliance advocates for the advancement of women in professional leadership and executive roles by annually reporting on the representation of women in the boardrooms of public companies headquartered in Maryland. The Census Report of Women Board Directors in Maryland is the only report of its kind statewide devoted to gender parity. Public policy and political action are part of Executive Alliance’s advocacy agenda as the organization successfully supported the passage of House Bill 1116/Senate Bill 911-Gender Diversity in the Boardroom during the 2019 Maryland General Assembly. The bill increases transparency by requiring Maryland businesses and certain nonprofits to annually report the number of women on their boards to the State of Maryland. With the passage of HB116/SB911 Maryland is now the second state in the nation to adopt women on boards legislation, and Executive Alliance lights the way as the Catalyst for Women Leaders in Maryland.

Executive Alliance is a statewide not-for-profit organization in Maryland composed of professional executive women. The organization initiates, supports and engages in activities to mentor and promote the advancement of women in executive positions. Executive Alliance promotes the placement of women on corporate boards and educates the public on the benefits of having women in decision-making positions. Members serve as role models and mentors to women seeking to advance their careers.

What does this bill do?

House Bill 1116/SB911 will require publicly traded, private companies and non-profits with operating budgets exceeding $5 million doing business in Maryland will report the percentage of female membership of their boards to the State Department of Assessments and Taxation using the Annual Report that is a required filing for all businesses and non-stock companies (nonprofits) and asks for a listing of Officers and Directors and will be amended slightly to indicate the percentage of female board members. The report is due annually on April 15.

How will having companies and large nonprofits translate into more board seats for women in Maryland?

What is the current level of women on boards in Maryland?

Executive Alliance, a nonprofit organization of women executive leaders, has for the past 10-yrs has researched and produced an annual “Census Report of Women on Boards in Maryland” which analyzes data from Maryland-based companies that are publicly traded on the major exchanges (AMEX, NYSE and NASDAQ). Maryland trails the national average of 22.5% of board seats held by women and executive positions in publicly traded companies headquartered in Maryland. Progress for women in Maryland over the past 10 years has been slow. In 2014, for example, 14.4% of board seats were held by women and in 2018, 16.8% of board seats were held by women although women make up 49 % of the workforce.

What Maryland companies are making progress?

Of the approx. 76 publicly traded Maryland companies an estimated 30 have at least 20% women on boards. A few of the more recognizable companies are as follows: Choice Hotels, Hamilton Bank, Legg Mason, Marriott, McCormick & Co., T. Rowe Price, Under Armour, and W.R. Grace. The vast majority of companies and large nonprofits are privately managed with far fewer women than the larger public companies listed here.

Have other states passed similar measures, laws and policies?

Yes, several states (California, Colorado, Illinois, Massachusetts, and Pennsylvania) have successfully passed resolutions and legislation calling for greater gender diversity-women on Boards. Most actions encouraged public/private and nonprofits to strive for 30% of women on boards. California recently passed a bill mandating 30%. A similar resolution was introduced in 2018 in the Maryland General Assembly, however, the resolution was voted unfavorably in the House committee and never received a vote on the Senate side.

What is different this year than last year?

Much is different this year which creates a better environment for passing HB1116/SB911. The “Me Too” movement and greater political engagement with historically greater numbers of women in elected office at the federal, state and local level in 2018-19 is a game changer. In the Maryland General Assembly, bills carry more weight than resolutions. It typically takes more than one attempt to get legislation passed, and although last year’s resolution did not pass, it succeeded in raising the issue. HB1116 has a sponsor and bi-partisan co-sponsors including a significant number of men. Finally, there’s a more extensive and strategic lobbying effort this year to generate broader support.

Census Report
We use cookies on our website to give you the most relevant experience by remembering your preferences and repeat visits. By clicking “Accept All”, you consent to the use of ALL the cookies. However, you may visit "Cookie Settings" to provide a controlled consent.
Cookie SettingsAccept All
Manage consent

This website uses cookies to improve your experience while you navigate through the website. Out of these, the cookies that are categorized as necessary are stored on your browser as they are essential for the working of basic functionalities of the website. We also use third-party cookies that help us analyze and understand how you use this website. These cookies will be stored in your browser only with your consent. You also have the option to opt-out of these cookies. But opting out of some of these cookies may affect your browsing experience.
Necessary Always Enabled
Necessary cookies are absolutely essential for the website to function properly. This category only includes cookies that ensures basic functionalities and security features of the website. These cookies do not store any personal information.
Non-necessary
Any cookies that may not be particularly necessary for the website to function and is used specifically to collect user personal data via analytics, ads, other embedded contents are termed as non-necessary cookies. It is mandatory to procure user consent prior to running these cookies on your website.
SAVE & ACCEPT